2017 was a great season for Royal Oak Robotics. We designed and built the most complicated and advanced robot in our teams history and it paid off. We ranked as high as we ever have, captained a finals alliance, and made our way to the Michigan State Championship.

Our robot was designed to tackle all three challenges offered by Steamworks. We could run gears, shoot fuel, and climb. Although our flywheel driven fuel shooter would struggle our gear carriage and climber proved consistent and effective. Combined with an experienced drive team and we had amazing success. 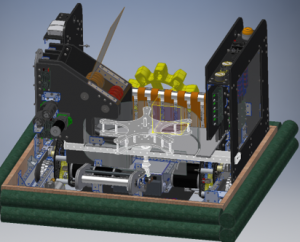 Our first tournament was the week 1 event at Southfield High School in late February. 1188 put up competitive numbers at the event and competed all the way to the semifinals. We would end the weekend in 15th place. Amazingly, this was at the time the highest rank 1188 had had but it was just the beginning. During the finals we were lent a climber unit from our alliance partner, Robostangs, which would inspire our new climber.

Just one week after our first event we headed over to Centerline Highschool for our second qualifying event. Our team showed strong improvements and was highly competitive. Closing out the weekend in 3rd place , another record finish, we would lock up our qualifications for the Michigan State Championship. While at the event 1188 climbed and placed many gears every match. Once again we made it to semifinals but lost by just 5 points.

For the first time in many years 1188 qualified for the Michigan State Championship where we competed on the Consumers Energy Division. We would battle through 12 very tough qualification matches and end up on the  number 3 alliance. Unfortunately this is where our season would come to an end when a series of untimely breakdowns of our partners robots would see us eliminated in the quarterfinals.